Release date for The Prince of Graves! And how to get an advanced review copy 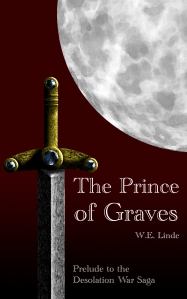 The Prince of Graves, prelude to The Desolation War Saga

The final cleanup of the manuscript is being completed as we speak. Once finished, The Prince of Graves will be ready for publication. I plan on starting the laborious formatting process this week. So I can confidently say that my debut work (short though it is), will be released on Wed 7 March!

For now I’ve decided to focus on the eBook version for the following few weeks. But I’m tentatively targeting early April for the release a paperback version. Yeah, I’m very excited about that too.

If anyone is interested in receiving an advanced review copy, please let me know. I’ll have copies available for anyone interested in posting a review. I realize that the reviews will not be ready before the release, so don’t let that dissuade you if you’re interested.

Thank you all. The amount of support I’ve received from my fellow writers and readers has been incredibly encouraging!

This entry was posted in Uncategorized and tagged creative writing, fantasy, publishing, self, writing. Bookmark the permalink.