The Accidental Astronomer: Watching the Eclipse from the Fringe

My neighbor called me up yesterday afternoon. “I’m setting up my telescope to watch the eclipse. Want to come?”

If you follow me on Twitter or Facebook, you probably know that I routinely repost/tweet images from NASA. I think of them as science fiction writing prompts. I’m a passionate (but passive) astronomy fan, and I was just speaking with my wife earlier that morning about how it would be nice to see the eclipse somehow. But not only did I not have the right equipment, I’m located in Ohio. I wasn’t all that sure what I’d be able to see anyway. So when my neighbor offered me a chance to tag along, I jumped at it. And besides that, I thought I could mentally record the experience for a future story.

We found a site pretty quickly, at the north end of a small airfield. We got to work immediately setting up the telescope. And by “we” I mean Roger, my neighbor. I contributed by 1) tightening one lug nut, and 2) trying not to break the approximately $8000 worth of equipment.

One highlight was when, as Roger prepared to calibrate the telescope, he looked at this digital display on the control pad. He squinted and said “I need to get my sunshield.” Sounded pretty cool to me. Here’s the picture: 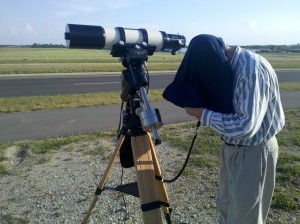 You laymen might have called it a “t-shirt.” Shows what you know.

The setup took about twenty minutes, and soon the telescope was tracking the sun.

We had estimated the eclipse to begin (for Ohio viewers) at about 2015 (8:15pm for you non-stargazing types). At 8:20…there was nothing. The sun was rapidly sinking toward the treeline. Just when we had accepted the fact that we were only going to get to see a pleasant sunset the moon’s shadow began to creep across the lower part of the sun.

I hope to get a copy of the photos that my neighbor took of the actual event, but in the mean time, this is what I saw displayed on the computer screen. That was pretty much all we got, as far east as we were. 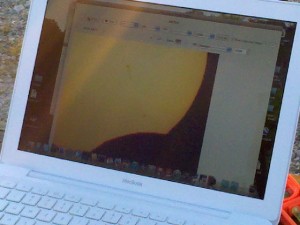 Not exactly a ring of fire, but still pretty cool.

It was after the sun finally set that we started looking at some planets, and a few stars. I contributed a little more here, by whipping out my Droid and pulling up Google Sky, which let me help ID a few celestial bodies.

All in all, it was a blast. Now the only thing keeping me from trying to convince my wife to let me buy a few thousand dollars worth of equipment for myself is the knowledge of the time this would rob from my writing.

At least I got to play for a few hours.