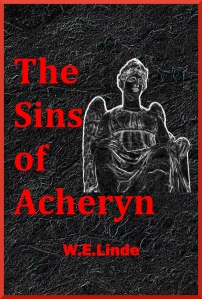 As promised, I’ve just released a new short story through Amazon! The Sins of Acheryn is now live. Here’s the description of my latest fantasy story:

The Sins of Acheryn tells the tale of the cataclysmic fall of a vanished empire. As the legendary Kings of Acheryn moved to consume the nations of the ancient world, her pride and violence rose to the thrones of heaven. At the pinnacle of her power, three judgments would punish the greatest empire of a world now lost to myth and time.

After the ending, I add the following in an author’s note:

The empire ruled by the High City of Acheryn, the bed of demons and debauchery, occurs in the distant past of the world of Maladine. Millennia later, and a continent away, The Prince of Graves tells the tale of the Sixth War between the last survivors of the mortal kingdoms and the Necromancers who poisoned the minds of the kings of Acheryn. This war sets the stage for the greater Desolation War series, to be published some time in the future.

I hope that you’ll give it a look. If you’re a member of Amazon Prime, you can check it out for free. Which leads me to this: I’m embarking on an experiment. I’ve never been keen on the idea of restricting my work to a single outlet, which is something that Amazon requires while you use KDP Select. Plus, I’ve heard mixed reviews about using this service. The most common of these from independent authors seems to be that, although they did see a significant number of downloads of their work during their “free days,” these surges rarely translated into reviews or sales of their other works. So at the end of the day, there was little evidence that anyone even read their work.

But I have a couple of reasons to give KDP Select a try. First, the service has been around a while now, so has had time to mature. Perhaps there has developed a more responsive audience since the program took off. Second, I feel I need to experience it first hand, in large part because of my plans to restart my Sojourner Mountain web site. Sojourner Mountain was (is) an initiative of mine to create tools for writers just getting started in the writing world. I feel I need to experience what Amazon has to offer so that I can give a more informed opinion of the pros and cons of using this tool of the world’s largest online retailer. Once the experiment if over, I’m sure to expand to Nook and other platforms.

Thank you all for your continued support! And as I mentioned last week, I’ll be posting a new work of flash fiction on this site in the near future. Keep an eye out for my first piece of science fiction, The Vacuum Isn’t Crazy About Nature, Either.

This entry was posted in Uncategorized and tagged fantasy, maladine, publishing, self publishing, short story, the sins of acheryn, writing. Bookmark the permalink.