The Problem With Vampires (Part One of Two)

Today’s overindulgence of vampires has given me an undead hangover

begged my parents to let me watch anything on TV that had a vampire in it. This included the well-known vampire movies, those starring Christopher Lee, and of course ‘Salem’s Lot. But this also included the odd and oft-times campy appearances of vampires. I’m talking lesser known movies like Vampire Circus (1972), the classic series Dark Shadows…heck, there was even a vampire story in an episode of BJ and the Bear.  This last example notwithstanding, these creatures embodied everything that made horror so, well, horrifying: they were irredeemably sinister, and operated outside of human understanding. Images of shadowy creatures with bright eyes and blood stained teeth lurking in the darkness kept me up many nights, wishing desperately for the sun to rise so I could get some sleep.

But something has happened over the years, and it’s not just that I’m getting older. Vampires aren’t what they used to be. Somehow vampires have transformed from this: 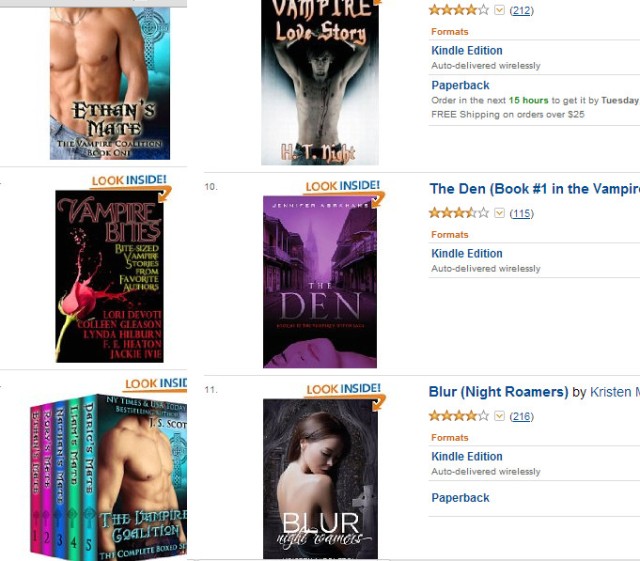 Please don’t take this the wrong way. I am not in any way criticizing the writers or the fans of books, and the similarly themed movies and TV shows, such as those you see above. But let’s be honest…if it weren’t for the word “vampire” stamped across these, I would have been sure that I’d been misdirected to the Romance section by Amazon’s search engine. And of course, it’s not just books. Shows like True Blood and the Vampire Diaries, plus (of course) movies like Twilight, have turned the vampire into something that it shouldn’t be: boring. I am not passing judgment on the literary or entertainment qualities of any of these books or shows. I can’t, since I have never bothered to read them. And before anyone tosses out the “then how do you know they’re boring if you’ve never watched/read these” argument, I have a couple of things to back me up. First, you have to be either blind or incredibly insincere if you try to argue that vampires haven’t really changed over the past 20 years or so. Second, as the saying goes, familiarity breeds contempt. Vampires are everywhere now. At least, what passes for them these days. While I’m all for the creative treatment of just about anything, I’m just going to say what’s really on my mind: vampires can’t be heroes. They’re the living dead, they feed on blood, and they are unholy and incapable of love. There…it’s out.

Now, I love Anne Rice’s Interview with the Vampire and The Vampire Lestat. Her works are examples of incredible creativity and powerful storytelling that demonstrates that there are no absolute rules in literature. However, I think Anne Rice did for vampires what Tolkien did for fantasy…she defined it so completely that most writers that have tried to emulate her (and these are legion) usually pale in comparison. But more significantly, I think what has happened since Rice’s The Vampire Chronicles publication is that the whole idea of a more “human” vampire has redefined the creature. Where once the vampire was defined by words such as “horrible,” “dark,” and “terrifying,” now it is “passionate,” erotic,” and “beautiful.” In my mind, in the world of horror, the vampire doesn’t need to be more human. The best horror is when the human struggles against inhumanity. Once upon a time, the vampire was the archetypal villain. We learned more about our protagonists as they struggled against the inconceivable horror of the vampire. Now, the vampire is simply a human who happens to be dead and has a substance abuse problem. One could argue that what has actually happened is that the vampire has been split into two different sub-genres…one classic, and one romantic or adventurous. If so, it makes no difference. The book shelves, various TV series, and movies have overwhelmed the image, and now I think the vampire has lost its edge. In short, it has become a sexual bore.

I’m sure there are plenty out there that disagree with me. I hope I haven’t offended anyone. I am hoping that I can generate some interesting discussions on this, though. What do you think? Is the vampire dead? Well, more dead? Or is this vampire genre more nuanced and fulfilling than I’ve portrayed?

I’ll continue this discussion a few days, when I publish my completely inaccurate, totally subjective history of the best and worst in vampire lore.

6 Responses to The Problem With Vampires (Part One of Two)