Sneak Peek: My new favorite comic…because I helped make it.

For the past 13 months I have been neck-deep in academia and the world of military history as I work on my master’s degree. I love it. It’s a real passion, and I’ve learned more than I can say. The only downsides (aside from depleting any free time and making sleep even more precious) is that my pleasure reading and creative writing have all but vanished. I should graduate this September, so there’s a light at the end of the tunnel. But the brain is an odd thing, and it’s been looking for a creative outlet.

That, in short, is what this post is about. Over the past few months some friends and I have collaborated – a few minutes here, a few minutes there – to bring life to something that was originally born for personal amusement. I’ll hold off on exactly how the idea went from offhand remark to what you see here, but I’m very pleased to introduce you all to President Jeff:

President Jeff is a web comic that will be launched on 14 April. President Jeff is first and foremost a comic strip. Think “Dilbert” meets West Wing. Or maybe Harvey meets Mr. Smith Goes to Washington. With its mix of images and drawings, it’s a world as strangely inconsistent and absurd as the real one. I just hope you’ll enjoy it. While the strip is set within the world of politics, “President Jeff” is mostly absurdity. If there’s a consistent political focus, it’s on often baffling actions of our political leadership, and not any particular ideology. The authors are political moderates, and therefore will probably annoy everyone  at some point. But most of the fun is had at the expense of the primary characters. We think everyone, from the apolitical to the political junkies, from conservatives to liberals, will find something to enjoy here. 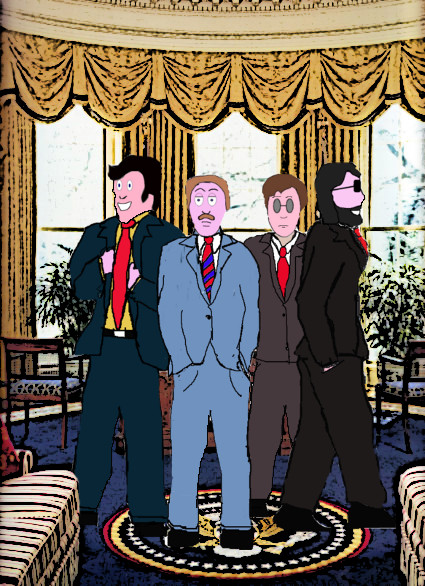 President Jeff and his Inner Circle.

As I said, the strip kicks off 14 April, but you can get a peek at what to expect now by visiting President Jeff’s blog page. There you’ll find a short introduction to how such a good-natured but clearly unqualified person attained the highest office in the land. Please follow the strip, leave comments, and share with your friends!

Hope to see you there.