A couple of months ago, I was somehow reminded of the old axiom “nature abhors a vacuum.”  For some odd reason, the title of this short story popped into mind right afterwards. This below bit of flash fiction wasn’t far behind that. It’s a bit of nonsense that I enjoyed writing very much. I hope you enjoy it as well. When I get the patience, I’ll format this for Smashwords.

The Vacuum Isn’t Crazy About Nature, Either 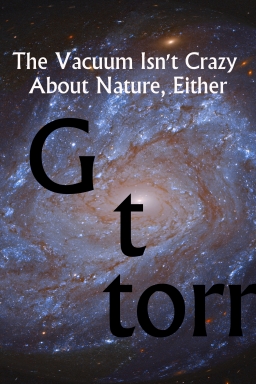 Look at this mess, said Nothing. It’s complete anarchy, and it’s disgraceful. Only when the flotsam and jetsam of Creation are removed from existence will there be true order. Nothing was cold and calm as always, but he had decided that enough was finally enough. Right now, everything is chaos!

Gravity, who was quite weak in this mostly empty pocket of the cosmos, gave a noncommittal shrug – an unusual stirring of subatomic particles that would fluster the juvenile scientists of the Universe had they instruments keen enough to pick up on it. No, at best the disturbance would be chocked up to “noise.” Gravity cast a slow, lazy glance to Time.

You might want to consider your audience, said Time, gesturing back toward Gravity. After all, we’re the product of Creation too.

Nothing was silent for a while.

Look, said Nothing, testier than Gravity or Time had ever seen him. We all know how this is going to play out. All of these wild particles, all of this overzealous energy… they’re going to go cold. It’s all going to collapse back in itself eventually. But frankly, I’m sick of waiting for it.

Time chuckled. She did it because chuckling always provoked him. She could sense when Nothing was in one of his “moods,” but now she was irritated by his last quip. As if she was responsible for his melancholy.

I suppose it would be impossible to wait, if it weren’t for me, said Time.

Gravity let out a long, low sigh, enough to distort the view of deep space telescopes pointing their direction. What exactly are you getting at now? I rather like how things are going. I’m hurling galaxies so far out, there’s no telling when everything will go cold.

I could tell you when, said Time, but that would take away the surprise.

Gravity guffawed, causing the closest star to collapse in on itself.

Nothing glowered as only Nothing could. Time almost regretted poking him. He was up to something.

Alright, she asked. What is it you want?

I would like you two, said Nothing after a time, to speed things up. Accelerate the expansion to criticality, then bring it all back together again. It’s time to clean up this mess.

Time and Gravity looked at one another, then back to Nothing. Things were getting awkward. Nothing wasn’t asking for the impossible — after all, the Heat Death of the Universe was a certainty. The same went for Universal Collapse. But there were dynamics still unfolding, Laws that had to be followed.

Suddenly Time laughed. It wasn’t a cruel laugh, but Nothing cringed.

I know what this is about! said Time. You’re still mad at Nature!

Nothing glowered even more, and shifted uncomfortably. What few loose particles flitted around him dashed away as quickly as the Laws allowed.

Gravity winked at Time. I’m all for it! But don’t think you’re fooling anyone, Nothing. Once we’re all packed back into Singularity, you’ve got everything else to yourself.

In a manner of speaking, mumbled Nothing. I’m just sick of all this chaos. He looked pleadingly at his companions. Do you think, next time, that you could think things through a little more before blowing it up again?

Time moved around Gravity and Nothing. She looked down through the Void, past the stars, past the galaxies, past the epochs.

It is kind of a mess, isn’t it? she said at last. I mean, it started so well. But it’s still a mess. I blame it on the antiquark ratios.

Nothing brightened. So you’ll do it?

She looked at Gravity. He was already flexing, and doing some practice pulls on a young solar system moving away from him.

Fine, said Time. We’ll do it. But you have to promise that the next go around you won’t complain so much.

Nothing was ecstatic as Time drew closer to Gravity. She smiled, stretched herself around him, and started reaching through the Void. Gravity groaned. Between the two of them, the near limitless quantities of created matter started to halt outward expansion.

Nothing bade his companions farewell, and withdrew to the edge of Creation. In silence he watched as every particle in the Universe first slowed, and then grew cold. Some time later (it was difficult to tell how long, with Time collapsing in on herself), the matter began moving again. This time, it zipped faster and faster away from Nothing, and toward the single point where Gravity and Time were calling, growing hotter and hotter as it did so. Why, in no time (ha!), everything that ever was would return to Singularity. Everything, that is, except for Nothing.

Who’s the big shot now, Nature? called Nothing to the rivers of atoms and subatomic particles as they raced away at speeds many in the Universe would have been surprised to have seen.  Maybe next time around, you’ll be a little more pleasant.

This entry was posted in Uncategorized and tagged flash fiction, nature abhors a vacuum, science fiction, writing. Bookmark the permalink.

1 Response to The Vacuum Isn’t Crazy About Nature, Either – Science Fiction Flash Fiction